Russia in Global Affairs is published in English quarterly since November 2002.

The Russian-language edition of the journal is published bimonthly since its inception in 2002.

Since 2006 the journal has been published by Foreign Policy Research Foundation.

Russia in Global Affairs offers an international platform for publication in English and Russian of the results of individual and collective research in political science and materials discussing social, historical, economic, cultural and military issues related to international relations.

The goal of the journal is to facilitate exchange of scientific knowledge across borders and across disciplines in political sciences and foreign relations; we aim to publish original research based on both empirical, rational and theoretical studies that is of interest and value to the international intellectual community.

Russia in Global Affairs is committed to following fair and professional practices in all aspects of its operation. The editors of the journal adhere to codes of ethical conduct accepted by international academic publishers and expect similar from its authors and reviewers.

The following are basic rules and standards for the journal’s editors, authors, and reviewers.

All submitted articles are subjected to “double blind reviewing” by recognized experts in respective fields. In order to ensure impartiality, each article is anonymized: the name of the author is removed from the article, including any reference to the author’s works, and replaced with the word “Author.” All titles of the author’s works and any other information that would allow one to identify the author are also removed.

Once reviewed, an article is returned to the author for considering the reviewer’s comments and criticism. The author may take them into account or ignore them. The final decision on the publication of an article rests with the Editorial Board.

The Editorial Board reserves the right to ask the author to elaborate on the article in order to meet the abovementioned requirements. 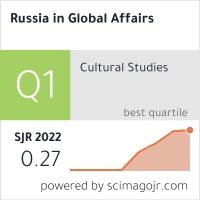 To Russian-language edition of “Russia in Global Affairs” at RSCI https://www.elibrary.ru/title_about_new.asp?id=9070

To “Russia in Global Affairs” page at RSCI https://www.elibrary.ru/title_about_new.asp?titleid=40359